Thank you for visiting our fly tying blog! Here you will find free step-by-step instructions for fly patterns that we have found to be very successful while fishing on the Tributaries of Lake Erie known as " Steelhead Alley." You will also be able to see step-by-step instructions for warm water, tube, trout, and destinational fly patterns. If you would like to request a pattern tutorial that you do not see, please send requests to team@steelheadalleyoutfitters.com 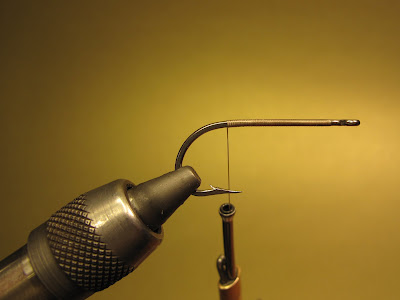 STEP 1: With your Gamagatsu SL11-3H size 1 in the vise, get your tan 140 denier thread started at the head and then wrap back down the hook to the rear tie in point. The traditional tie in point is located when your thread hangs at the halfway point between the hook point and the barb. 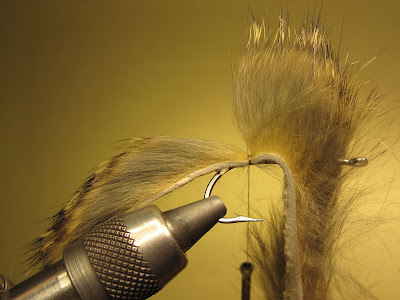 STEP 2: Tie in the barred rabbit strip off the back of the hook at the rear tie in point. To have the best connection to the hook shank separate the hair to the hide, and tie in the strip by the hide only with three or four tight wraps over the same point. 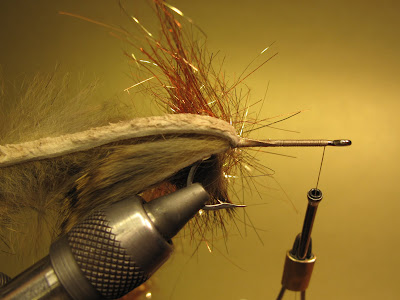 STEP 3: Fold the rabbit hide backwards and tie in one of the EP Sparkle brushes in by the end. 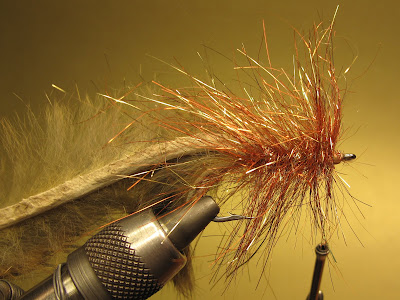 STEP 4: Fold the fibers to the back and wrap the EP Sparkle Brush forward to the head of the fly. As you wrap forward continue to fold and stroke the fibers back so you do not trap fibers as you work your way up the hook shank. Once you have wrapped forward stroke the fibers forward and pick out any fibers that were trapped so you have a nice full and even body. 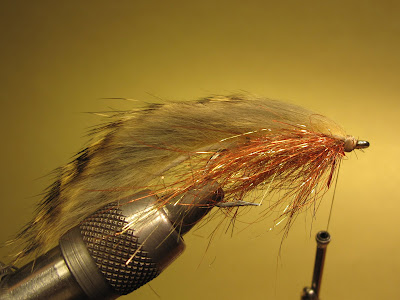 STEP 5: Split the fibers as evenly as you can down the hook shank and then pull the barred rabbit forward to the eye. As you did for the rear tie in point, stroke the hair forward so that you can tie in the strip by the hide only. Once you have a tight couple of wraps cut the strip off so it looks like a V from above; doing so will allow you to secure the hide to the hook with the least bulk at the head. 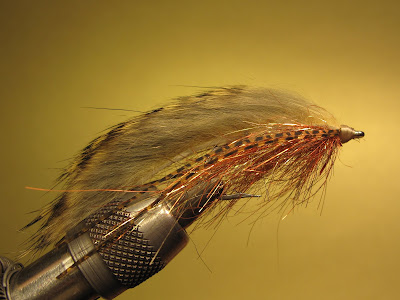 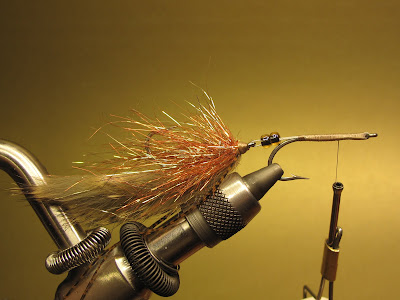 STEP 7: The hook connection is made with 19 strand .018" Beadalon. Run it through the eye of the back hook, double it over, and thread on two brownish glass beads. With your thread at the back tie in point of the second hook you now invert your back hook, place it so that the hook swings freely and tie the Beadalon down. You will wrap it all the way up the hook shank, down through the eye, and back down the bottom of the hook shank. Add a dose of glue as you wrap and the back hook is going nowhere. 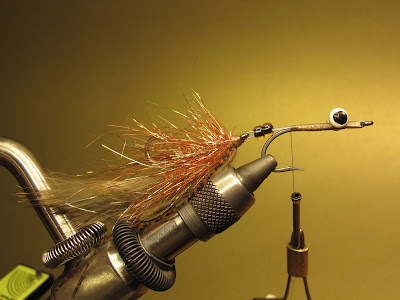 STEP 8: Approximately one third of the way back on the hook tie in a large white barbell eye on top of the shank. The best way is to figure eight a few times then wrap around the base of the eyes (below the eyes but above the shank)…then repeat two or three times to fully secure in place. STEP 9: As you did on the back hook, tie in the EP Sparkle Brush at the tie in point. Fold the fibers to the back and wrap the EP Sparkle Brush forward to the eyes of the fly. Once at the eyes take one wrap forward over the barbell and tie the brush down in front of the eyes. Again, as you wrap forward continue to fold and stroke the fibers back so you do not trap fibers as you work your way up the hook shank. 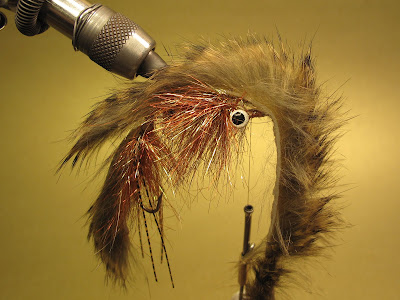 STEP 10: This is the tricky step… Remove the hook from the vise and impale another rabbit strip so that it hangs off the back of the hook to the rear part of the head on the back hook. Once the rabbit is in place put the hook back in the vise. 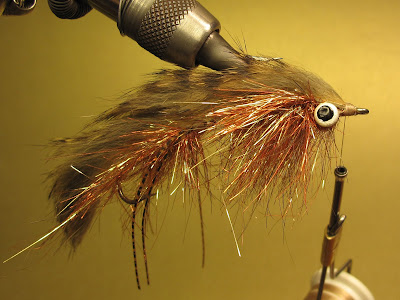 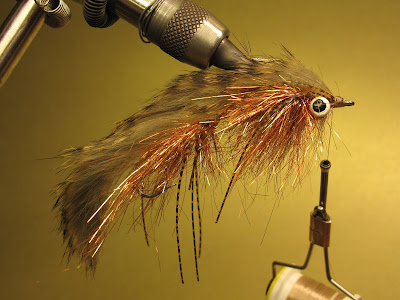 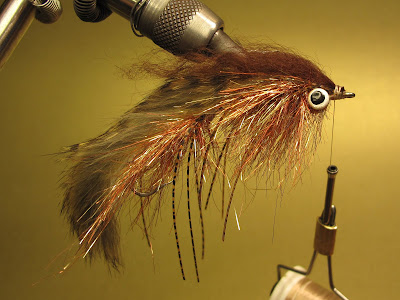 STEP 13: For the head of the fly we will use Rams Wool to add color definition and bulk. Clip out a bunch of dark brown wool and tie it in as a topping. The wool should extend approximately half of the way back on the fly. 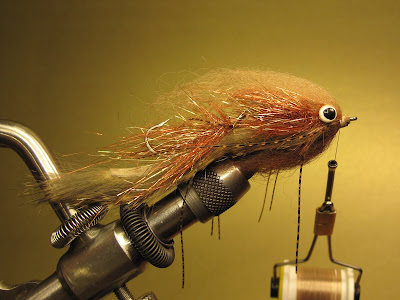 STEP 14: Flip the hook and tie in tan wool for the belly of the fly. Again, the wool should extend approximately half way back on the fly. The belly should be about as long as the topping…but certainly not longer. 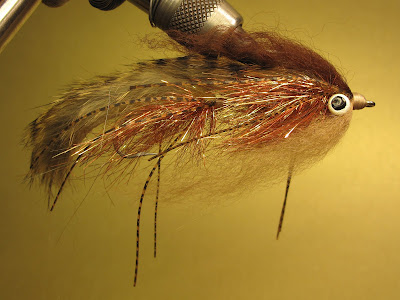 STEP 15: Finish off the fly by binding down all the materials and creating a nice smooth head then hit it with a bit of head cement to add a bit of added durability and you are set to hit the water. 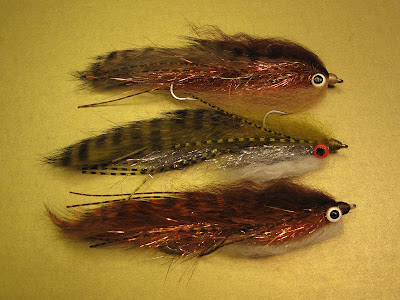 Here are a few variations of this bread and butter streamer. Whether you are swinging this fly, giving it a little twitch, or furiously stripping it in...it has the action to pull the big fish from their lie for a tasty meal. 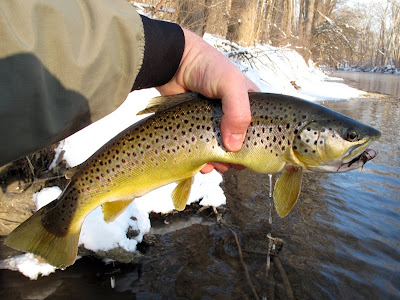 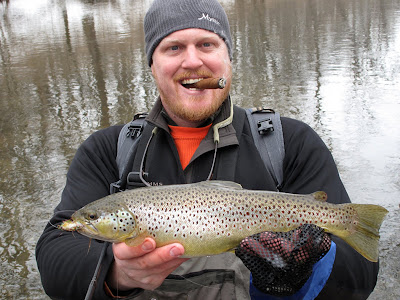 This fly has proven itself to be irresisible to trout, smallmouth, and pike. Next up...musky! To order this pattern or my other patterns, or if you have any questions about the pattern that were not addressed, please visit http://www.anglerschoiceflies.com/.
Posted by Mike Schmidt at 7:10 PM

Book A Trip and #GoWithSAO